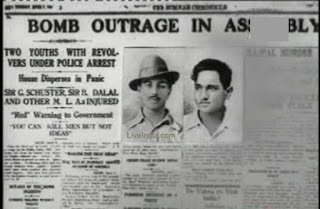 Bhagat Singh received his primary education from the Dayanand Anglo-Vedic High School, an Arya samaj institution. His father and two of his uncles were members of the GHADIR PARTY and were involved in the Indian independence struggle. Inspired by father and 2 uncles, he grew up to be a patriotic young man and decided to dedicate his life to the independence movement. He joined the national college in Lahore in 1923. His participation inevitably the freedom struggle intensified during this period. 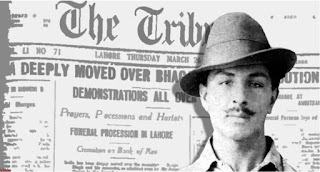 In 1926, Bhagat Singh founded the ‘NAVJAVAN BHARAT SABHA’ (Youth society of India) and joined the Hindustan Republican Association (later known as HINDUSTAN SOCIALIST REPUBLICAN ASSOCIATION), where he met several prominent revolutionaries. He had great respect for LALA LAJPAT RAI who injured in a protest against the SIMON COMMISSION. When RAI died a few days later, Bhagat Singh decided to avenge his death and he threw bombs inside the central legislative assembly and offered himself for arrest. He was released 5 months later on a 60,000 rupees bond and began to write for various revolutionary newspapers.

On March 23, 1931, 7:30 am, Bhagat Singh was hanged in Lahore jail with his comrades Rajguru and Sukhdev. It is said that the trio proceeded quite cheerful towards the gallows while chanting their favourite slogans like “Inquilab Zindabad” and “Down with British Imperialism”. Bhagat Singh and his peers were cremated at Hussainiwala on the banks of Sutlej River. Bhagat Singh was only 23 years old when he was hanged. His death inspired hundreds to take up the cause of the freedom movement. 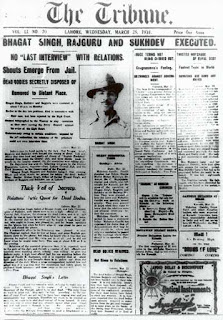 Several films like “SHAHEED” (1965) and “THE LEGEND OF BHAGAT SINGH” (2002) were made on the life of a 23-year old revolutionary. Numerous books, articles, and papers have been written about his life, ideologies and legacy.
See Also