Skip to content
Contents hide
1 important facts of Sukhdev’s life
2 joined the Hindustan Socialist Republican Association and organized
3 prison hunger strike 1929
4 Bomb planing in the legislative assembly
5 Police launched a mission to catch Sukhdev his partner
6 Day of judgment
7 martyr day source-https://upload.wikimedia.org
8 on 23rdMarch 1931,the three brave revolutionaries were hanged, whilst their bodies secretly cremated on the banks of the River Sutlej.

Sukhdev Thapar was born on 15th May 1907 in Naughara, Ludhiana in Punjab to Ram LalThapar and Rallidevi in Khatri  family. Sukhdev ’s father died and he was brought up by his uncle LalaAchintram.

Sukhdev had once poured nitric acid over his left arm to remove an “Om” tattoo. He just wanted to test his endurance with this. In fact, he burnt his wounds over a candle flame to remove remaining marks.
Even in school, he never complained when he was punished for not saluting an English Military officer.
Since his childhood days, Sukhdev had witnessed the brutal atrocities that the  Imperial British Raj  had infliction Indian, which then led him to join the revolutionaries, vowing to set India free from the shackles of British dominion.

Sukhdev joined the Hindustan Socialist Republican Association and organized revolutionary cell in Punjab and other areas of North India. He was the chief of Punjab unit of HSRA and instrumental in taking decisions. He was a devoted freedom fighter and a leader and also went to educate the youth in National college Lahore, inspiring the students about the glorious past of India.

Sukhdev along with other revolutionaries started the “Naujawan Bharat Sabha” in Lahore. This organization was involved in various activities including gearing the youth for the freedom struggle, inculcating a rational scientific attitude and putting an end to communalism and untouchability. 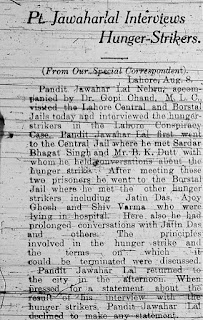 Sukhdev himself took an active part in

several revolutionary activities like the ‘Prison hunger strike’ in 1929; however he is best remembered for his courage attack in Lahore Conspiracy case 18 Dec.1928 and its aftermath. He was an associate of Bhagat Singh and ShivaramRajguru, who assassinated Deputy Superintendent of policeJ.P.Saundera in 1928 in response to the violent death of the veteran leader Lala Lajpat Rai. Sukhdev was prime accused in the Lahore Conspiracy case of 1930, whose title reads “Crown versus Sukhdev and others”. The FIR of the Lahore conspiracy case, filed by Hamilton Harding, senior superintendent of police, in the court of R.S.Pandit, the special magistrate in April 1929 mentioneSukhdevas accused number 1.

Bomb planing in the legislative assembly

Initially the plan to drop bombs in the Central Legislative Assembly did not include Bhagat Singh as HSRA ’s Central committee refused to send him for the job. It was Sukhdev who later convinced Bhagat Singh to do it.
After the central  Assembly Hall bombings in New Delhi(8thApril 1928). Sukhdev and his accomplices were arrested and convicted of their crimes, facing the death sentence as the verdict.

Police launched a mission to catch Sukhdev his partner

The police launched a massive operation to find out the culprits and kept a block on all possible exits and entrances. Sukhdev along with other revolutionaries hid for the next two days. On Dec. 19,1928 Sukhdev called on Durga Devi Vohra, wife of Bhagwati Charan Vohra for help, to which she agreed. They decided to catch a train from Lahore to Howrah. To avoid recognition, Bhagat Singh cut his hair short and shaved off his beard. In the early morning next day, dressed in western attire, Bhagat Singh and Vohra passed off a young couple with Bhagat Singhcarrying Vohra ’s child oh his shoulder.Rajguru was disguised as their servant carrying their luggage. They manage to escape to Cawnpore. On reaching there, they boarded a train to Lahore. in Lucknow, Rajguru left separately for Benares while Bhagat Singh and Vohra with the child left to Howrah.some days before Sukhdev was executed, he wrote a letter to Gandhi in which he stated “ the three prisoners of the Lahore conspiracy case have been awarded capital punishment”. He also wrote the country will not gain as much by the change of their sentences as it would by their being hanged.

On 7 Oct 1930, a 300-page judgment was delivered for Saunders murder case by the tribunal on the basis of all the evidence and sentenced Bhagat Singh, Sukhdev and Rajguru to death by hanging.

on 23rdMarch 1931,the three brave revolutionaries  were hanged, whilst their bodies secretly cremated on the banks of the River Sutlej.

SukhdevThapar was just 24 years old when he became a martyr for his country, he always remembered  for his courage, patriotism, and sacrifice of his life for India ’s Independence.
You should also read the biography of Bhagat Singh and Rajguru.